NT Economy to Capitalise on a Renewable Energy Future

Renowned as one of the sunniest places on earth, the economic and environmental benefits from renewable energy in the NT is significant.

The Northern Territory (NT) has a plan to reach a 50 per cent renewable energy target by 2030. Roadmap to Renewables was released by the NT Government in 2017, focusing on how the NT can capitalise on its abundance of renewable resources.

A number of Australian and overseas companies have already sought to grasp these significant opportunities, with multiple million-dollar and even billion-dollar renewable energy projects already in progress in the Territory.

Solar energy projects have been the most popular renewable energy developments in the NT, though this comes as no surprise, with the NT receiving the highest amount of solar radiation per annum of all States and Territories in Australia.

At the same time, the enormous opportunities associated with producing hydrogen from renewable energy sources in Australia, for both domestic and export markets, are starting to become clear.  Australia is developing a National Hydrogen Strategy and the NT has a significant potential part to play, given its abundant solar resources and proximity to Asian markets.

Beyond Zero Emissions predicts that a renewable hydrogen development in the NT could result in 8,000 new jobs for the region, along with the generation of $2 billion worth of export revenue by 2030. 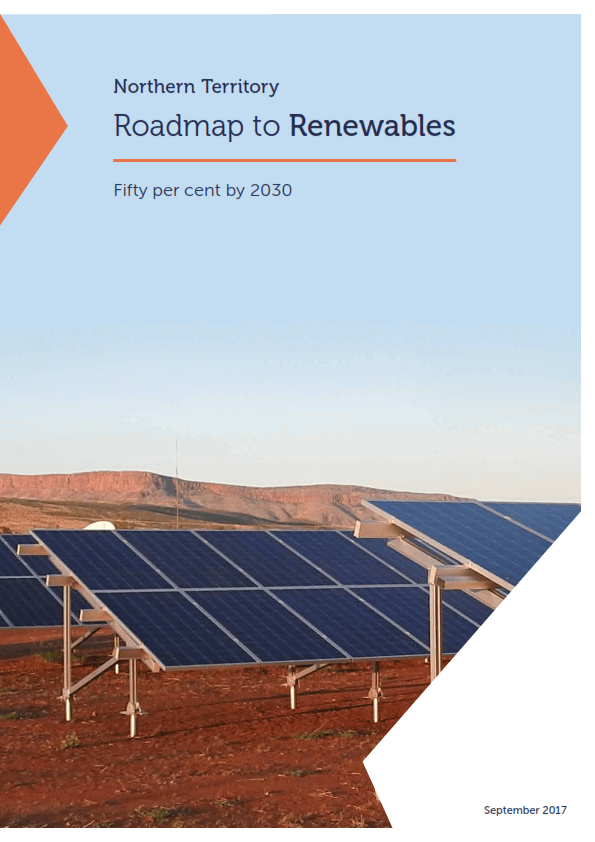 Along with reducing greenhouse gas emissions, and improving long-term energy security by avoiding use of ultimately limited fossil fuels, renewable energy is becoming a cost-competitive component of Australia’s energy mix.

As technology improves and manufacturing becomes more efficient, the high capital costs that were once associated with renewables are reducing at a rapid rate. Smarter project designs, that incorporate complementary forms of generation (such as solar-wind hybrids), batteries or other energy storage components, are also solving some of the reliability and system stability hurdles that have previously been limiting the uptake of renewable energy, as they can now better match the local energy demand curve and deliver energy when it is needed, rather than just when it is able to be produced.

“solar is the cheapest form of new electricity generation”, and that “the Northern Territory has one of the best solar resources in the world”.

Major solar farms are already in operation in the NT with more in development. Notably, a $20 billion solar farm has been proposed for Tennant Creek, which will supply power to Singapore. Earlier this month, the Minerals Council NT publicly backed what is to become the world’s biggest solar farm noting the project will create “massive opportunities” for the mining sector.

These projects follow the Australian Renewable Energy Agency (ARENA) having pledged millions of dollars in funding towards renewable projects across Australia. ARENA have committed to investing in developments that assist Australia in becoming a “renewable energy superpower”.

The Power of Hydrogen

Hydrogen burns without generating carbon emissions, and packs a huge energy punch for its weight.  That means that hydrogen is capable of use as either a low carbon or carbon-free fuel (depending on how it is produced) that is ideal for transport use where being light-weight is an advantage.

Alternatively, hydrogen can be mixed with natural gas in a local gas distribution network to reduce the carbon emissions of gas use, and in future may be able to replace the use of natural gas entirely.

Solar power can be used to power an electrolyser which splits hydrogen from the oxygen in water, resulting in the production of hydrogen which creates zero carbon emissions.

This hydrogen can then be used locally or can be converted to a liquid form and shipped to countries such as Japan and South Korea that use vast quantities of it for energy and industrial purposes, but have limited capacity to produce it without the use of fossil fuels.

Not only does this produce “green hydrogen”, but it also unlocks solar resources that might otherwise go unused due to the relatively low demand for electricity in the NT, especially solar generated electricity that peaks during the day but drops away overnight.

If you are looking to develop a renewable hydrogen project, some of the matters that you will need to consider include:

Finlaysons Lawyers has extensive experience in the development of energy projects, including renewable hydrogen projects.

We have an office in Darwin’s CBD and lawyers with deep expertise in areas such as commercial contracting, taxation, property, land access, environment and planning, project approvals, and native title and Aboriginal heritage.

Please contact Martin Kelly, Jeremy Schultz, Andrew Dyda, Gavin Cragg or Kyra Reznikov if you would like to meet with the Finlaysons team to discuss how we can assist you to get your renewable hydrogen project.

This Alert is intended as an alert only. It does not purport to be comprehensive advice. Readers should seek professional advice before acting in relation to these matters.