The Role of the Will in a Succession Plan

The first step in making a Will, whether or not a business is involved, is to take instructions, including details of the client, his or her family, the people the client ought to have regard to, the assets (those which can pass under the Will and those which cannot) and what the client wishes to achieve.  The ownership of assets should be checked, firstly to ensure that the client is the owner and that the asset is not owned jointly as joint tenant, in which case it cannot pass under the terms of a Will, but will pass by survivorship on death to the surviving joint owner.

If there are likely to be any claims made against a deceased’s estate on death (known as TFM claims), super death benefit can be nominated to certain dependants directly by Binding Death Benefit Nomination, rather than to the Legal Personal Representative which would direct it into the estate, making it susceptible to a claim.  Life insurance can also be nominated outside of the estate.  Where there is no prospect of a TFM claim, but an individual wishes to offer the next generation increased asset protection and tax mitigation opportunities, it may be an option to ensure that super death benefits and life insurance do fall into the estate and pass on death into discretionary testamentary trusts.

If assets are bequeathed on death to the next generation absolutely and, at the date they inherit, they are going through a relationship breakdown or have an interest in a business which is in trouble, their inheritance may be susceptible to being claimed by a trustee in bankruptcy or taken into account on divorce.  If the inheritance passes into a testamentary trust, with independent Appointors controlling the trust, through the power to remove and replace the Trustee, and an independent Trustee owning the trust assets and making discretionary decisions as to who, from a class of beneficiaries, can benefit from the trust income and capital at any time, then it is afforded more protection.

When businesses are involved, it is important to obtain copies of all trust deeds and amending deeds, to obtain the details of the Trustee, the Appointor, the potential beneficiaries and how control can pass and to check for any traps.  The constitution of any company and any shareholder agreement should be checked to ensure there are no restrictions on transfer of shares.  Financial statements for each entity should also be obtained to check the assets and liabilities, including any sums due to the individual personally.  Problems can occur when control of a business entity is intended to pass by Will to one child, and the residue of the estate is to pass to another, but a debt is owed by the business entity to the deceased individual which is not forgiven and must be repaid by the entity to the estate of the deceased individual on death.

The Will should deal with passing control of trusts, companies and unit trusts.  The trust deed of a trust is the “rule book” and sets out how control of the trust can pass.  Usually a trust deed will state that the Appointor of the trust can nominate a new Appointor by Will and therefore the Will should contain such a clause.  The Will should deal with company shares (including shares in a corporate trustee) and trust units, if there are no restrictions in the constitution, shareholder agreement or unitholder agreement.

The diagram below shows how a business structure can pass on death to the next generation. Using the example of Blue Sky Pty Ltd. 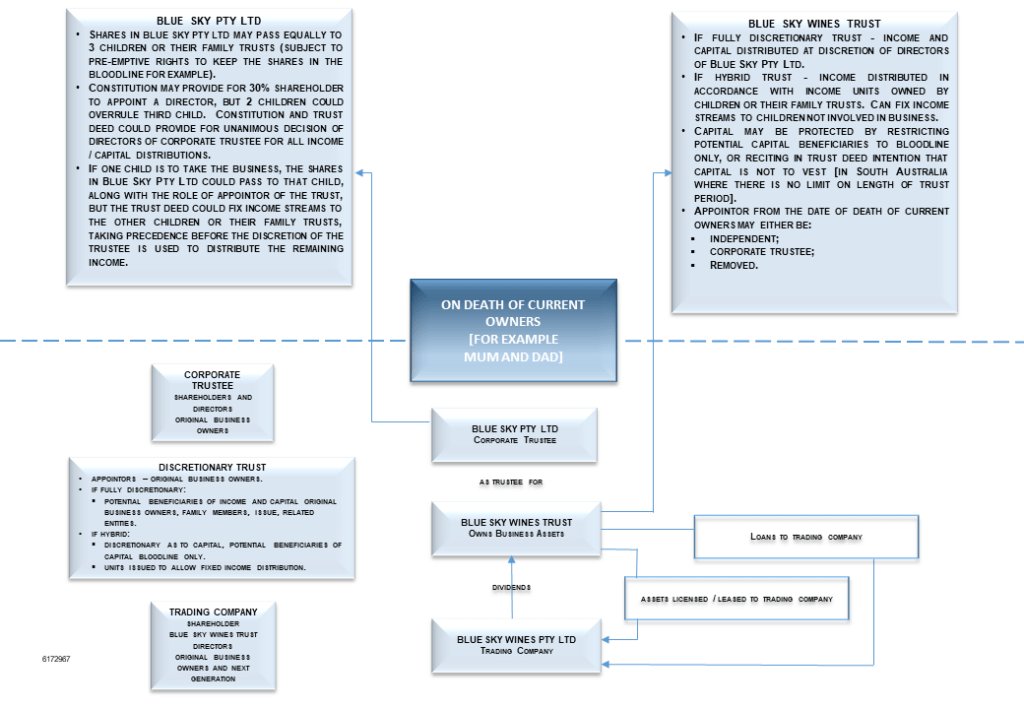 10 ARTICLES TO ASSIST YOU IN HAVING A CONVERSATION, PREPARING AND SETTING UP A SUCCESSION PLAN

This was originally published in Australian & New Zealand Grapegrower & Winemaker.

This article is based on the law as it stands on 16 April 2020.  It is not intended to be a complete and definitive statement of the law and the information and views contained in it should not be regarded as a substitute for specific advice in individual situations. Further professional advice should be sought before applying the content of this article to particular circumstances.