Will Changes to Unfair Contract Term Protections Affect Your Business?

Careful consideration should be made when assessing the proposed amendments to Unfair Contract Term Protections. Could they affect your business? Should you be submitting a response to the Government's Consultation Paper?

Since 2016, the Australian Consumer Law has provided protection for small businesses against “unfair contract terms” and, in recent years, the ACCC has successfully taken enforcement action to protect small businesses in a range of industries. The Commonwealth Government has released a Consultation Regulation Impact Statement in relation to enhancing the unfair contract terms regime, which contains proposals that, if adopted, will significantly impact many businesses. Interested parties have until 16 March 2020 to make submissions to the Government in response to their paper. You may wish to consider the practical impact of these proposed amendments on your business and whether it is appropriate to make a submission.

A term is unfair if it:

Under the UCT law, courts may declare terms of contracts they deem ‘unfair’ to be void.

A 2018 Government Discussion Paper suggested that the UCT law, as it stands, does not provide small businesses with adequate protections.

In addition, there are many circumstances where it is unclear whether a term of a contract may be unfair: what is unfair in one contract, or in a particular industry, may not be unfair in another. Further, whether a pro-forma contract which is negotiable is ‘standard form’ is another common question.

To address some of these shortfalls, and reduce the prevalence of UCTs, the following amendments to the UCT law have been raised for discussion in the Consultation Regulation Impact Statement: 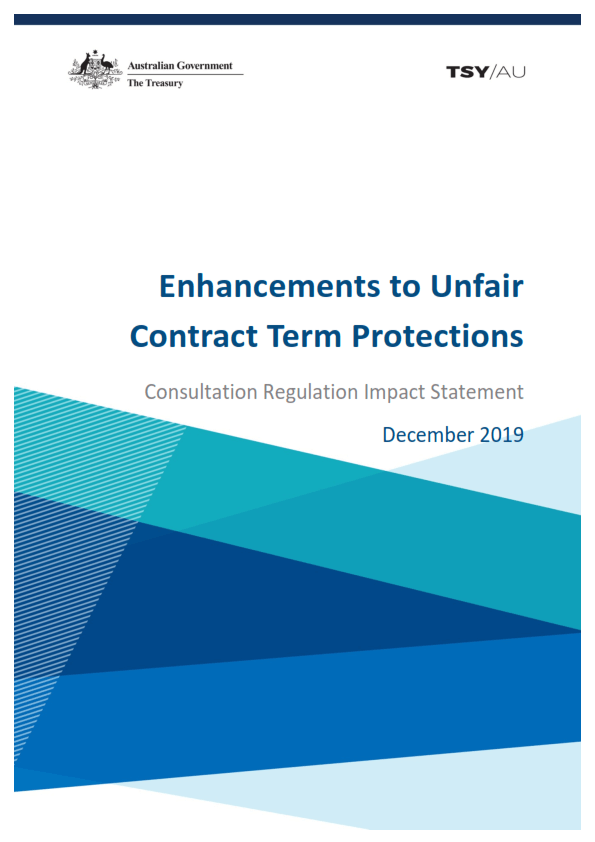 Some of the options for reform of the UCT law raised in the Consultation Regulation Impact Statement are very significant. In particular, in the context of legislation that is already very “grey”:

One could argue that the proposals further encroach on the freedom of parties to contract. Contracting parties will be required to lean on their lawyers even more than they currently do because it will become very risky to sign any standard form, small business contract without a legal review.

The Government requests submissions in response to the  options for reform it raises for discussion.

The proposed amendments have the potential to substantially expand the number of business dealings which will become subject to UCT law and increase the complexity and risk in contracting.

You should consider whether the proposals  may impact on your business and whether you would like to make submissions in response to the Government’s Consultation Paper.

Please contact Lisa Calabrese or Will Taylor if you have questions regarding the UCT law or the proposed changes or if you would like assistance with a review of your contracts or your submission to the Government.