The Hydrogen Action Plan identifies domestic and export market opportunities for hydrogen produced using renewable energy generated in South Australia.  It also sets out the key SA Government initiatives that are aimed at enabling South Australia to utilise its abundant renewable energy resources, as well as its land, infrastructure and skilled workforce, to grasp the significant opportunities presented by the emerging global hydrogen economy.

The initiatives are described in a framework of five strategies for developing a hydrogen supply sector in South Australia: 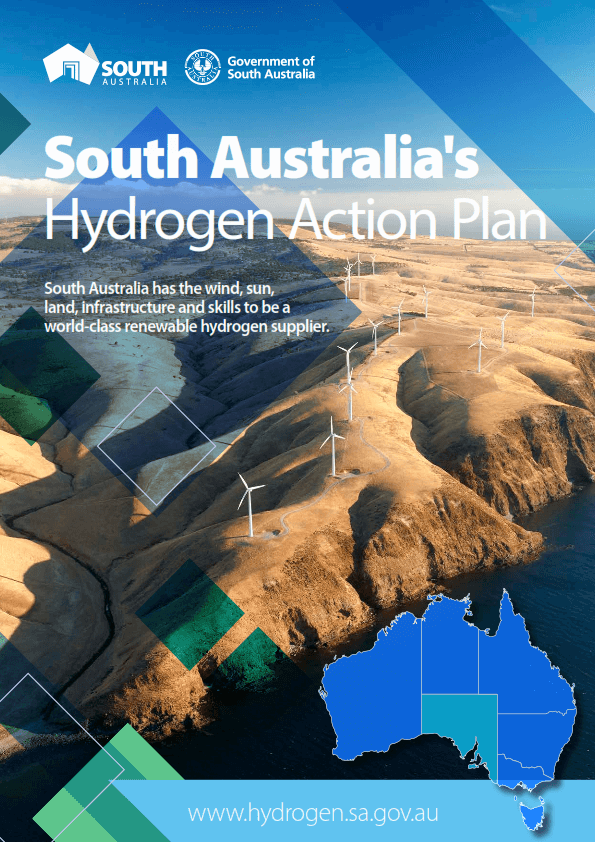 What are the Key Initiatives of the Hydrogen Action Plan?

Some of the initiatives described in the Hydrogen Action Plan include:

Hydrogen burns without generating greenhouse gas emissions.  It can be mixed with a natural gas supply to reduce the emissions from gas-fuelled burning, and in appropriately modified devices, it can be used as a replacement fuel source.

Vehicles that are already in use around the world that are powered by hydrogen fuel cells include cars, buses, trains, trucks, forklifts and motorcycles.  Opportunities exist to develop hydrogen-fuelled ships and even spacecraft.

Stored hydrogen can be converted back to electricity using a fuel cell or gas turbine, so it can be used to stabilise the electricity network by generating electricity when it is needed.

Hydrogen can be used to manufacture ammonia, which can be used directly to fertilise agricultural land or further processed into other forms of fertiliser.  It can also be used in the manufacture of various industrial products.

Liquefied hydrogen can be exported by sea, allowing local renewable energy sources to be ‘exported’ to the world.

South Australia has significant areas with weather conditions that are ideal for co-located wind and solar-powered energy generation facilities.  These sites are the most desirable for locating electrolysers that produce hydrogen from water using a consistent, on-site supply of low-cost renewable energy.  These sites are already close to natural gas pipelines, rail and road infrastructure and the State’s cropping lands that provide a ready market for ammonia and/or fertiliser that is currently imported from interstate and overseas.

The SA Government is keen to facilitate the development of pilot, demonstration and larger facilities that operate across the whole of the hydrogen supply chain, and has already co-invested more than $17 million in grants and $25 million in loans to four local hydrogen production projects.

Now is the time to be thinking seriously about developing hydrogen (and associated ammonia) projects in SA.